Bouncing off the walls... 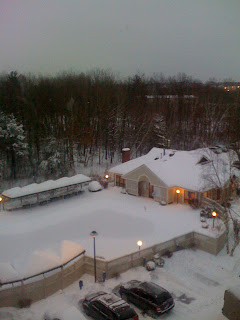 It's three days before Christmas and my daughter, like many children out there, is absolutely bouncing off the walls. She is simply overexcited to a degree that I've not seen in a long, long time.

This weekend, we had our first snow storm. We got about 3 feet of snow! My daughter was so wired she demanded to go outside and play in the snow during the storm. This is the most snow she's ever seen in her life and I imagine (or am hoping) that in a few weeks, the novelty will wear off and this Caribbean Queen can enjoy the heat I pay so dearly for in my rent. Lest I digress...it was fun to watch her enjoying herself...it was as innocent as the white driven snow she was frolicking in. I watched as she rolled down a hill of snow and giggle uncontrollably. And I thought to myself, "These are the moments".

Today, she had her first snow day. I, however, still had to go to work. I left her and my hubby outside with her playing in the snow when I pulled off this morning. After I returned home and released my work energy, I sat down with my daughter to listen to Christmas Carols on the radio station. She informed me that we had exactly one hour left to call the station because Santa was calling in from the North Pole to talk with some lucky children. After 73 busy calls, we finally got through. She told Santa her wishlist, "Pet Shop, an iPod and an iDog", and it was broadcasted live on the radio. Now, she is *really* wi-red. Her lips are moving uncontrollably as she is pacing incessantly..."Santa's going to come to my house first; I was the first one to talk to Santa; I forgot to tell him about Super Pink Kirby; I forgot to tell him about Pixos...". Thanks a lot Santa.

And I have to remind myself, "These are the moments".

That's so kool. These ARE the moments. I smiled the entire time I read your story. Sigh. How wonderful it is to be a child. Your daughter's excitement is so intriguing to me, delicate (because of "Santa" not real) but yet so powerful (she gave life to Santa) I saw hope, faith and love in her while I read your story. Beautiful.