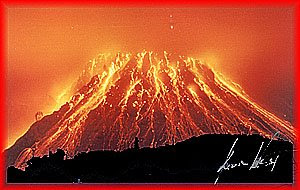 When the Soufriere Hills volcano became active in 1995 in Montserrat, the Emerald Isle of the Caribbean, I did not know what to think or how to feel. No one or nothing could have prepared me for what was to come. Afterall, the volcano had been dormant throughout recorded history (at least over 400 years since it was inhabited by our native, aboriginal Arawak and Carib Indians on what was then known as Alliouagana "Land of the Prickly Bush").

I distinctly remember taking school field trips to the volcano as a young child. Our teacher asked one requirement of us: to bring along an uncooked egg. We were all fascinated by the mystery of it all so everyone obliged. We excitedly boarded the bus, fighting to get the back seat first, as we set off on our adventure to the hills.

I could smell the overwhelming scent of sulphur in the air (which by the way is reminiscent of a rotten egg) and it grew even stronger as we approached the top of the mountain. We would then hike up the volcano which was more crater-like than I had expected. It was really a mountain with secret caves and pockets hidden within. When we reached our destination, our teacher asked us to remove our eggs. We were then instructed to gently place our eggs in one of the volcano's pockets which was filled with steamy, hot water. Carefully, we placed the eggs in and watched in amazement as Mother Nature cooked our eggs to perfection.

Another favourite pastime on these field trips was to bathe in the natural hot springs bubbling out of the earth at the base of the volcano. The heat from the volcanic activity would keep the water at the perfect temperature. Relaxing in a natural, outdoor sauna atop a lush, tropical mountain overlooking the Caribbean Sea was simply a magical experience.

Over the years, many tourists have graced those hotsprings as well as enjoyed many other attractions, like the natural water springs, on this beautiful 39 square foot island. Much of the island had rivers flowing throughout its lush, green landscape, from the mountains to the sea. As children, we always knew the rule of thumb: if you ever get lost, follow the river downstream and you will eventually reach the sea. From there, you can find your way home to any given location depending on which bay you ended up on.

It has been said by locals that during the early 1990s, some brilliant capitalists decided to harvest the waters of the rivers for a water bottling project. What they didn't respect was the fact that the waters necessarily cooled the veins of the volcano. Fast forward a few years to July 18, 1995, and the volcano retaliated from the human invasion and decided to roar in opposition. Montserrat has never been the same since because the volcano eventually rendered more than half of the island uninhabitable, buried the island's Georgian Era capital, Plymouth (including Montserrat Secondary School-my alma mater) in mud and ashes, and destroyed the airport and docking facilities. (For people from the Caribbean that meant, "no more barrel a come"). For me, it meant that a tangible part of my personal history was literally being erased and that any future child of mine would more than likely never see or experience on a first-hand basis these historical places that had been so instrumental in my upbringing. It was not an easy concept to digest or accept but I found some solace in the fact that I was born and raised in the northern part of the island (which used to be the "country"). At least for now, that was not in the direct path of the volcano's pyroclastic flows.

So, as Christmas approaches each year, it's bitter sweet for me. I can only tell my daughter of one of my most memorable, childhood holiday traditions where hordes of festive children and families would flock around the evergreen tree in the centre of Plymouth waiting patiently for Santa's arrival from the North Pole, for in reality, she will not be experiencing that with me during her childhood. However, now that she's at an age to remember, she is going to hopefully experience her first "white" Christmas. She has never seen real snow and is ridiculously looking forward to it. Tonight, we went to our new town's tree-lighting ceremony and she even asked me to turn up the Christmas carols on the radio as she peered out the window at the newly hung decorations while we drove to the centre of town. The excitement and anticipation is unbelievably infectuous.

And yet, I continue to remember my fellow countrymen and women during this holiday season because as we celebrate today, they are still literally living under the imminent threat of Mother Nature's fury as her volcano continues to erupt.

*And finally below, The Associate Press' coverage of today's eruption:

OLVESTON, Montserrat: Montserrat's volcano fired glowing red rocks and towers of gray ash into the sky early Friday for the fourth time this week, but no injuries or damage were reported, scientists said.

The pre-dawn blast followed three explosions earlier in the week, which released blistering gases and steam from inside a hardened lava dome topping the Soufriere Hills volcano, according to Roderick Stewart, director of the Montserrat Volcano Observatory.

The first explosion on Tuesday at the cloud-shrouded volcano — the first in nearly six months — occurred without any seismic activity. Subsequent explosions sent glowing streaks of red from pyroclastic flows down the mountain's western side.

"The activity this week has demonstrated that explosions and pyroclastic flows do occur without any warning whatsoever," said Stewart, one of the scientists who monitor the volcano and report any changes to the island's 4,500 residents, who live in northern areas declared safe.

Now that's a field trip! Your childhood memories of Montserrat are so beautiful and real. I can see myself standing their watching my egg cook.

I sounds like a beautiful place to live! Thank God you have such beautiful and spiritual memories of Montserrat. It shapes who you are...really. It is reflected in your story -- peaceful and strong.