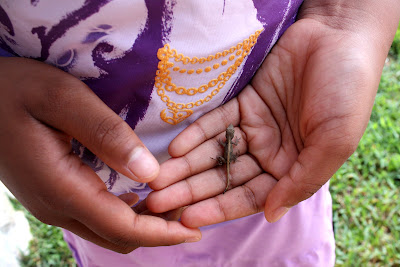 i vow to develop COMPASSION
in order to protect the lives
of people, animals, plants and minerals.
~ ~ ~
I recently had a reasoning session with a very dear friend, Amani, about being mindful of the value of life for all sentient beings.  We started to discuss those creepy little spiders (you know the ones) and my automatic mental response was "SQUISH."  I paused and began to reflect on my lack of mindfulness as Amani expressed her amazement and fascination about the Most High taking such care in creating their tiny bodies in such great detail.  She rhetorically asked, "Why would i smash it when i could just shoo it away?"  Her words resonated deep within my soul...and I instantly felt remorse for my impulsive desire to squish the little buggers so that I could feel more comfortable with my existence while completely disregarding their own. (on knees, hands clasped, eyed tightly shut - whispering 'Father, please forgive me!!!!").
It is against this backdrop that my heart sank last night when I received the news that the state of Georgia and the United States Supreme Court had declined to save the life of Troy Davis, a Black man on death row who was accused and convicted of murdering a white police officer on the testimony of 9 witness (7 of whom had since recanted); a case in which no physical evidence ever tied him to the crime.  (exhale).  As his executioner entered the death chamber, Mr. Davis continued to profess his innocence and prayed for those about to take his life.  Though his request for further investigation to seek the truth fell on deaf ears of those in positions of power, my earnest prayer is that Mr. Davis is now in a more peaceful place than he encountered here on earth and that his pain in leaving us was not too great.
I do find it quite interesting that while the debate on stopping the execution was raging on, the mother of the victim stated that she would find peace in Mr. Davis' death. (a foreign concept to me, but i can appreciate her suffering).  Today, however, her statement is that "All the feelings of relief and peace I've been waiting for all these years, they will come later.  I certainly do want some peace."  I sincerely pray she finds it.  May the truth soon reveal itself so that Mr. Davis' family can also embrace peace.
Posted by SE'LAH... at 5:09 PM

HI LOVE - powerful post. When my son was a young boy he always carefully captured spiders and placed them outside. ANd this smae young boy, now a wonderful young man was home for a few days here with us and we watched as we heard the news of Troy Davis's execution and I saw his face deepen and a tear formed and fell - and I felt such joy that his compassion for spiders as a child and his compassion for humanity as an adult are the same, -glorious.
Love to you and all you do
Gail
peace......

So much to think of on this one, Se'Lah. I never was comfortable with spiders but always made a point to try and made them leave my house by shooing them away.
Reading about the execution of this man I find myself so sad. An eye for an eye is never in my opinion the solution.

I love the way you took my thoughts on bugs & made it into such a wonderful post! You are truly a gifted writer/thinker. I never gave bugs a second thought until I gave them an up close look. And on the matter of Troy Davis, my heart sinks low. His mother is teaching the highest way of forgiveness. Like the Amish when the little girls were killed; they went & consoled their daughters' killer's family as they were hurting too.

So many lessons to be learned always. One Love.

My heart goes out to Mr. Davis and his family. This is a major case where justice is indeed blind and the color of someone's skin is the result. I wonder what would've happened if Mr. Davis were white. It pains me that the color of one's skin determines what people think. How ignorant, biased and prejudiced can we be? While I will think before I squish the next time I encounter a spider, all bets are off for stink bugs!