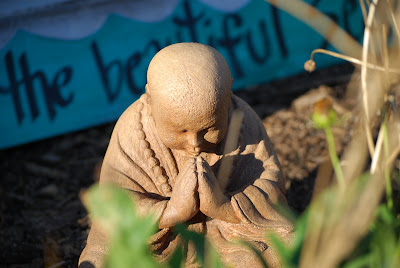 taking a moment
for prayer and meditation.


I admit it.  I have been lost in a forest of thoughts...so many ideas about what I can do for my random act of kindness on the 13th of November, 2010.  I am overly delighted to be celebrating World Kindness Day with so many of you as we collectively focus on doing something kind for someone unsuspecting.
There are a lot of people who need our help and support in this world, whether locally or globally.  Although many do not receive media attention until their plight reaches sensationalizing proportion, the deplorable conditions under which they are forced to exist remain each and every day.  Take for example Haiti.
Haiti, located just 681 miles of the coast of the USA, has been one of the most impoverished independent nations in the Western Hemisphere for as long as I have been on this plane.  On January 12, 2010, a devastating 7.0 magnitude earthquake shook Haiti, leaving in its wake 230,000 dead and over 1 million who still homeless remain today.  Up popped the tent cities for those who could squeeze in the unsanitary, overcrowded camps in and around Port-au-Prince.  The earthquake survivors continued their plea for help in obtaining more sustainable living and housing conditions.  And though the rainy season began in the Spring, further threatening their health and well being, international donors have only delivered about $732 million in funds of the promised $5.3 billion in aid and debt relief that they had pledged when the cameras were rolling, and the USA had not yet delivered any of the promised $1.15 billion as of three weeks ago.
Well, the situation has now worsened.  There is currently an outbreak of cholera in Haiti.  Over 250 people--mostly children--have died so far, and another 2674 others infected, while health officials scramble to contain the disease which has now reached the densely populated capital, Port-au-Prince. (exhale).
Along with donating to Project Medishare for Haiti, I plan to take a few silent moments throughout this week to send prayers up for the people of Haiti.  i still see you.  one love.
Posted by SE'LAH... at 7:05 AM

Was just listening to a story on NPR about the cholera outbreak in Haiti. A few weeks ago a coworker's sister was going there with her church group, and was asking for donations. I was happy to have some opportunity to be helpful in some way.

nice post! I appreciate your kindness and for having a heart for others especially those in dire need. God bless you more and more!
Speaking of taking a moment, today, I also pause for a while and focus not of the things that I've been so up to these days. It felt good and hopefully when I get back, I'll have fresher and better ideas and strength restored.

Oh how I love and honor the depth of your peaceful and loving intent, always for the good of humanity - always founded in love. You are an inspiration. Two things are on my mind to do that day. One, it just so happens that it is my retirement party from my work, after two decades plus in human services. phew. Initially there was a woman that i worked with that I told the party planners "NOT to invite for a miriad of reasons - I am going to retract that and include her. What was I thinking? And secondly we just received in the mail an opportunity to buy live stock or tree seeds or bees and so forth for villagers in starving countries, so we have decided to buy part of a water buffalo. This is inspired by YOU, loving, kind wonderful YOU.

Your heart always guides me to look within and be aware of my fellow brothers/sisters in need. Thank you for letting me know how to help, Se'Lah

I heard about this cholera outbreak and it is just hurting my heart. Thanks for letting me know what I can do to help. Lots of love to you :-)

Hi Dear Se'lah, I just heard about the cholera outbreak yesterday, I am very concerned how fast that could spread.prayers are sent to Haiti. It infuriates me, what are they doing with that money. Do they not think this is serious enough. hugs Selah, you have a beautiful heart.

I have to agree w/all the others readers; I have always been touched by your compassion for all others; it is TRULY inspiring as you can see. Heavy prayers for those in Haiti; it saddens me how disasters seem to 'fade away' after time.

Se'lah, your heart is so big that you can wrap the whole humanity in it, it's amazing and so inspiring. Problems like diseases such as cholera etc. tend to occur in regions after such a disaster like the Earthquake in Haiti ... After the first aids people are left without help in terrible conditions ... so heartbreaking. They are all in my prayers! Be well dear friend! hugs!!

This weekend in our newspaper there was a three page coverage on what's currently happening in Haiti, and with focus on this terrible outbreak of cholera. It just breaks the heart so bad that things are still in such a bad way there...*praying with you, Se'Lah! Thank you for the tip on Project Medishare for Haiti, and how we can help. :o) ((LOVE & HUGS))

A worthy cause indeed!

Se'Lah dear, thank you so much for this timely posting and for the link to Project Medishare for Haiti. I have just donated a small amount. I hope it helps some.

Just after the earthquake, even as we were all so full of the news and donating what we could, I read that the organizations would be holding back monies for the rebuilding. I was angry about it then because I knew there would be other needs (such as this cholera outbreak) and such slowness in progress of rebuilding that we would not be able to figure out what was happening to the money. I can only imagine what the folks in Haiti must be thinking and wondering. To say it is maddening is an understatement.

Thank you for your loving heart that you so freely share with us.

you, my dear sister, never cease to amaze me, to inspire me, to love others the way that you do. xoxo

Thank you for keeping Haiti at the forefront of our minds. We need you! We get so caught up in survival that we sometimes don't realize that our version of survival do not compare to the people of Haiti! Every chance I get, I will hold them in consciousness.

Thank you for your consciousness Se'Lah and all that you share with us. :)